The Internet of Things

The #IOT is one of the biggest technology trends of 2015. Internet connectivity, once limited to computers and smartphones, is now baked into everything from smoke alarms, to bicycle locks, sex toys, electricity meters… even entire cities.

What does this mean to us as consumers? Will it make life better? Is it just for geeks? Do we risk having stuff that once “just worked” crashing and falling prey to viruses? And what about privacy?

Roger is the founder of Sensing City - an initiative to incorporate sensors and a data overlay into the rebuild of Christchurch. He has been mentioned in the FT, written for Scientific America and speaks regularly around the world on innovation, data and cities.  He never passes on the chance to write his own bio.

Amber is a senior architect at ANZ and an elected Councillor at Internet New Zealand. Amber has worked elerxtensively in the banking and telco sectors. Outside work, she blogs about gaming and technology and helps organise Geek Girl Dinners. 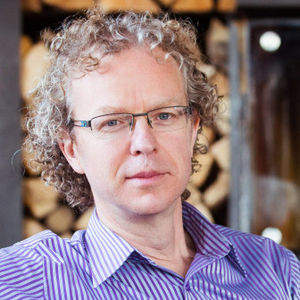 Michael is General Manager Digital at Fisher & Paykel Appliances with a remit including connected appliances. Michael's whole career has been spent in digital, first on the content side at Telecom Xtra, then in a range of technology, digital and mobile roles at ASB before joining Fisher & Paykel in 2013.

Rohan is Strategy Director at Crown Fibre Holdings, which was established by the Government to manage its investment in ultra fast broadband. He's worked in telecommunications and Internet services for over 20 years: at Telstra (Australia), as founder of an Internet start-up business and as a management consultant.

Energise your day with Fitbit Charge HR (RRP $199.95)– A high-performance wristband that delivers real-time fitness stats right on your wrist.

Vaughn Davis (@vaughndavis) is owner and creative director of advertising agency The Goat Farm. In 2010 he wrote New Zealand's first book about social media, Tweet This Book. His favourite gadget is called Mother and his favourite goat is called Korma.

If you’re a #smcakl regular you’ll know just how good our sponsor Invivo’s wine is. Graham Norton loves the stuff so much he invested in the company and now you can too. Invivo is the first New Zealand wine company to list on crowd equity platform Snowball Effect. The offer goes live next week but as a fan of the brand you can preregister early at snowballeffect.co.nz/offers. The minimum investment is $1000, shareholders get regular perks from Invivo (spoiler: wine) and there are terms and conditions on the site but you knew that, right?